Some of you, dear customers, actually know all three locations that we have had and have in Chemnitz in our nearly thirty-year company history. After the beginnings in 1993 on Annaberger Strasse in the south of the city, in a rather inconspicuous building on the grounds of the Alfred Weigel spring factory, there was a second domicile a stone's throw away from the first on Paul-Gruner-Strasse. Long-standing customers fondly remember the red brick building, which was built as a gym at the turn of the 19th century and is equipped with striking arched windows. With some additions and conversions, the building offered a charming home for the presentation and auction of art and antiques, and an "Adenauer-Mercedes" also fit into the exhibition, pushed in over the back of the building. Nevertheless, the house became too small over the years and with the increased demand for photo work, storage facilities and office space, the decision to move again matured. 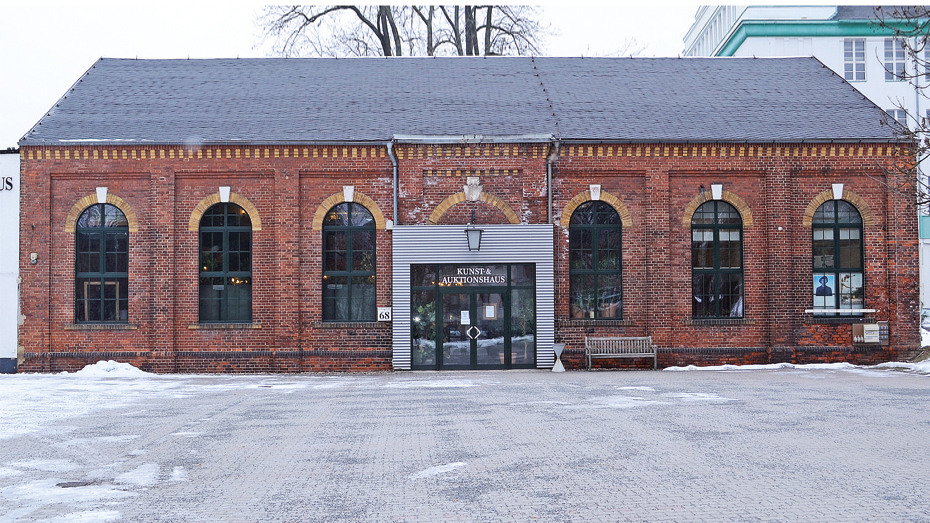 The auction house on Paul-Gruner-Strasse in Chemnitz, location from 1998 to 2012

View from the gallery into the large interior, Paul-Gruner-Strasse, 2012 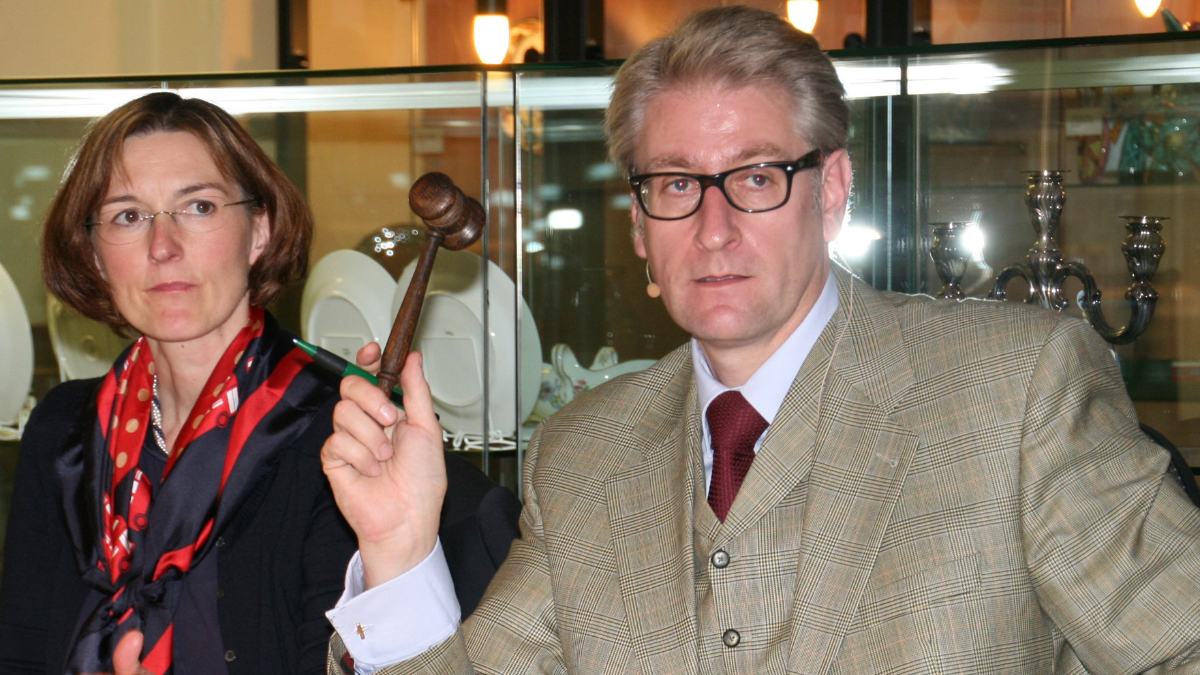 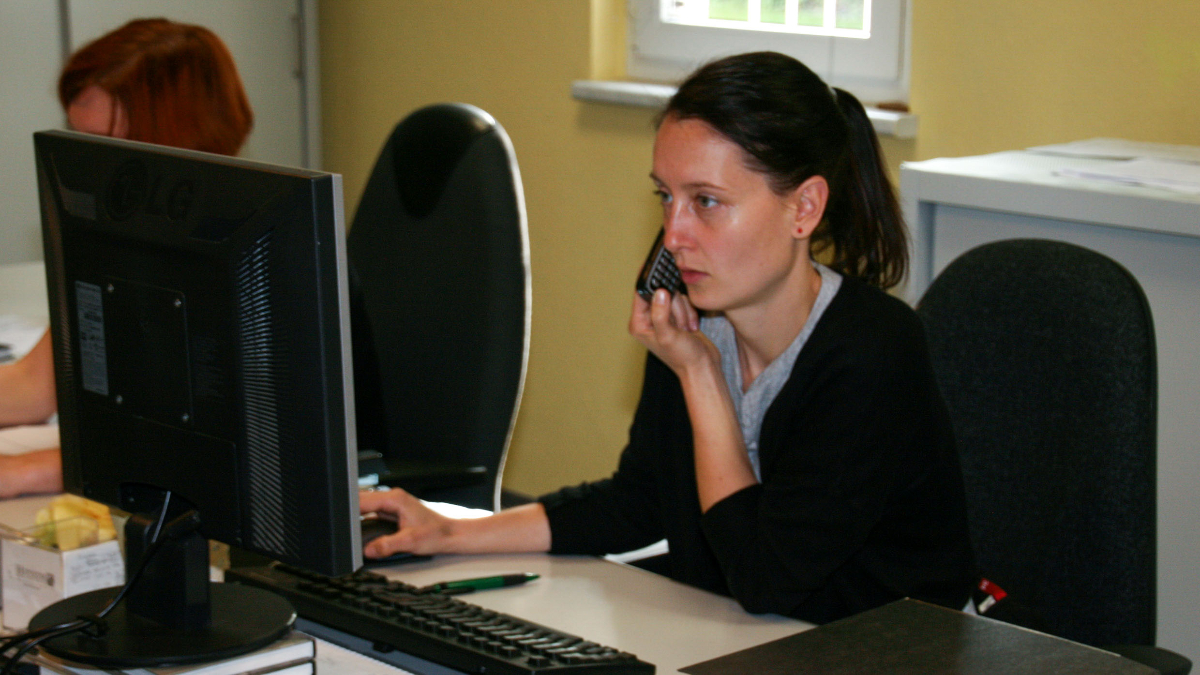 In the cash register and posting office, Paul-Gruner-Straße, 2012

The domicile at Zwickauer Strasse 108

Since 2013, the Heickmann auction house has been located in an industrial monument in Chemnitz. The current location on Zwickauer Straße, opposite the Saxon Industrial Museum, is quite remarkable in terms of cultural history: the facility belonged to a textile factory, and textile production was, alongside mechanical engineering, the mainstay of the local economy and partly responsible for Chemnitz's nickname "Saxon Manchester". It is not just any textile factory that was based on this site, but Sigmund Goeritz AG, which is known throughout Germany. Founded around 1886 as a glove factory, it developed into one of the largest producers of fine and elegant lingerie in Germany in the 1920s. Swimwear and sportswear were manufactured on the site until 1991. And last but not least: The area includes one of the most important industrial monuments in the city, built by the Expressionist architect Hans Poelzig.

View of the company premises around 1911 (from: Chemnitz in words and pictures, commemorative publication for the inauguration of the new town hall, 1911)

The yellow brick four-storey building on Zwickauer Straße, in which the Heickmann auction house has occupied the top two floors since 2013, was built around 1900 and initially housed a carpet factory. Around 1906, Sigmund Goeritz (1856-1920) acquired parts of the building and finally the entire area along the Kappelbach, a small tributary of the Chemnitz. Gradually, extensions for production, drive and administration were built, such as the dark red brick factory building in 1911 with a total of six floors, which is still located at the rear of the site today, and the boiler house in between.

The major project by Hans Poelzig

In the 1920s, the now internationally renowned entrepreneur Goeritz planned an extensive redesign of the company premises. For this task he was able to win over Hans Poelzig (1869-1936), in the 1910s and 20s one of the most renowned German architects of modernism. As early as 1906, Poelzig had been dealing with industrial buildings, which, in contrast to the classic architectural tasks such as large urban buildings, residential buildings or sacred buildings, were free of conventions and allowed for new ideas. From 1916 Hans Poelzig worked as a municipal building officer in Dresden, and so the well-known artist must have appeared within reach of the owners of Sigmund Goeritz AG. In 1922, Poelzig took on the task of redesigning the factory premises - a highly prestigious project in one of the most important industrial cities in Germany. He designed a monumental building that should illustrate the importance of work and human creativity. The planning went so far that a building complex for over a thousand textile workers was to be built. Due to lengthy approval procedures, which entailed a number of plan changes, the first construction work did not take place until five years later. Due to the decline in purchasing power and the associated economic difficulties, Goeritz AG was also forced to start with only partial construction. In 1927, for example, the construction on Ulmenstraße was implemented, to which further construction phases are to be added at a later date. Unfortunately, the project was never continued. 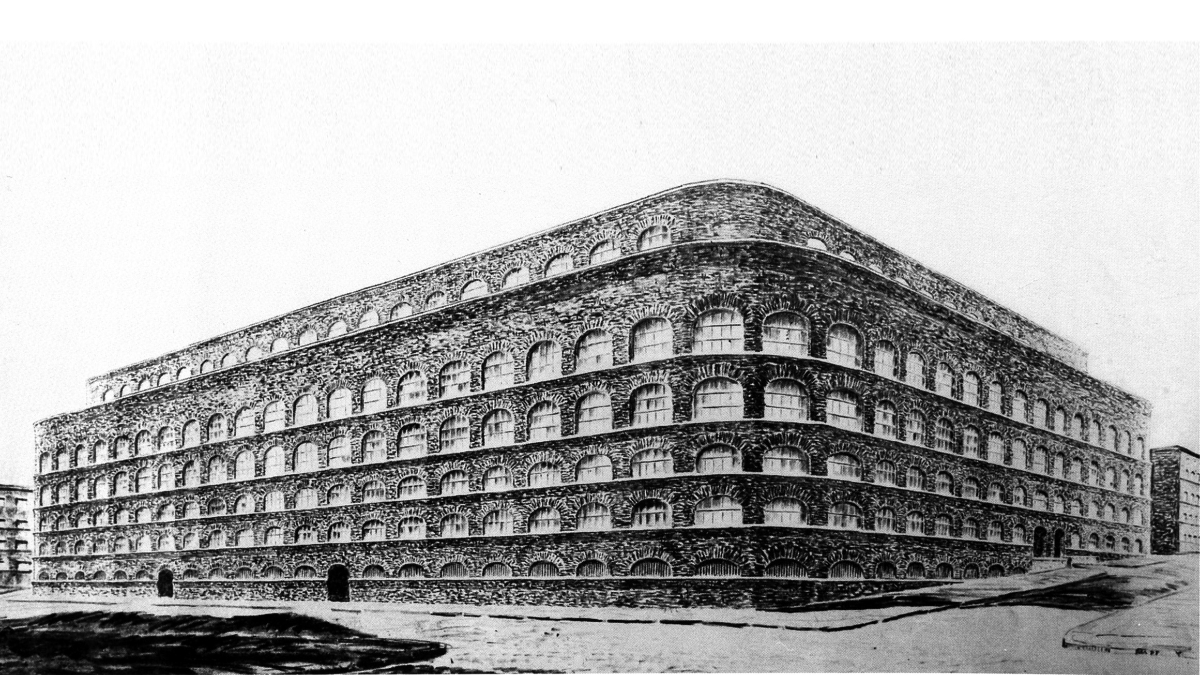 The partial construction, which was carried out in 1927 under Poelzig's aegis, appears dark and defiant with its low-looking window openings and the coarse cladding with chloride slate. Inside, however, the building is a lightweight reinforced concrete structure that meets all the requirements of a factory. Brightly lit open-plan offices were located on the lower floors, while sewing machines stood side by side on the upper floors, as in the neighboring building. If Hans Poelzig's original plans had been implemented, there would have been a huge block of architecture along Ulmenstrasse and Zwickauer Strasse, for which the yellow clinker building in which our auction house is located would have had to be demolished. It would have been the most impressive factory in Chemnitz. In fact, the part of the building that luckily remained undamaged during the war at least gives an impression of what could have been built.

The manufacturing family Goeritz was of Jewish faith. In 1938 the family was expropriated, the company assets confiscated and the company name deleted. Only a few family members managed to escape from Germany, and many died. With the illegal Aryanization of the company, the company was renamed “Venus-Werke”. Lingerie and swimwear continued to be manufactured with great success. Production continued even during the war years 1939-45, although measuring devices had to be assembled as a by-product for the armaments industry. Fortunately, the area was largely spared from bombing, but not from the dismantling of the plants as Soviet reparations after 1945. However, since parts of the machinery outside of Chemnitz had been secured during the war to prevent loss through war damage, and these machines from the occupying forces remained undiscovered, it was soon possible to continue production despite dismantling.

The company premises in the GDR era

In GDR times, the textile industry flourished again in the Chemnitz area. Now part of VVB Strickwaren Oberlungwitz, the company, renamed “VEB Ideal” and later “Sporett”, became the most important manufacturer of sportswear in the GDR and beyond. The four-storey building on Zwickauer Strasse – our auction house – housed the canteen on the ground floor and administration as well as production rooms on the upper floors, which are now used by the auction house. The dye works were also located on the site, which often made the Kappelbach shine in bright colors. In the red clinker building and in the adjacent Poelzig building, sewing took place on two floors. Hundreds of seamstresses sat here along a conveyor belt and worked piecemeal. One floor accommodated the cutting, another the quality control and the laying shop. The warehouse was on the ground floor, and several fully laden trucks left the premises every day. With the turnaround, the textile industry collapsed not only in Chemnitz, but in the entire region. Although for a short time they still sewed for West German mail order companies, the transaction was inevitable. Around four hundred seamstresses lost their jobs and the entire site was deserted. Only the "Sporett" advertisement on the front of the building on Zwickauer Strasse bore witness to times gone by for many years - today this is where the name of our auction house is located. In the meantime, the extensive area has been newly developed, with our auction house making the start together with a Harley Davidson branch in 2013. A cycle and walking path leads along the Kappelbach across the site and invites you to linger in the ice cream parlor. The Poelzig building and the large red brick factory building have been extensively renovated and converted in recent years and have been given new life with condominiums. It is therefore a pleasure for us to welcome you in the heart of Chemnitz in such a beautiful place! The Heickmann auction house at its current location Our auction house offers space for acceptance and consignment, a café and auction room as well as a large exhibition area on its two spacious floors. The rooms of the Chemnitz frame factory, where you can purchase high-quality frames for your art, join the various offices, photo studio and warehouse. Events take place in addition to the auctions. We can look back on readings by Guntram Vesper or the married couple Wolfgang and Helene Beltracchi, among others, as well as panel discussions and exhibition openings. We are also happy to rent out our upper floor for your event. 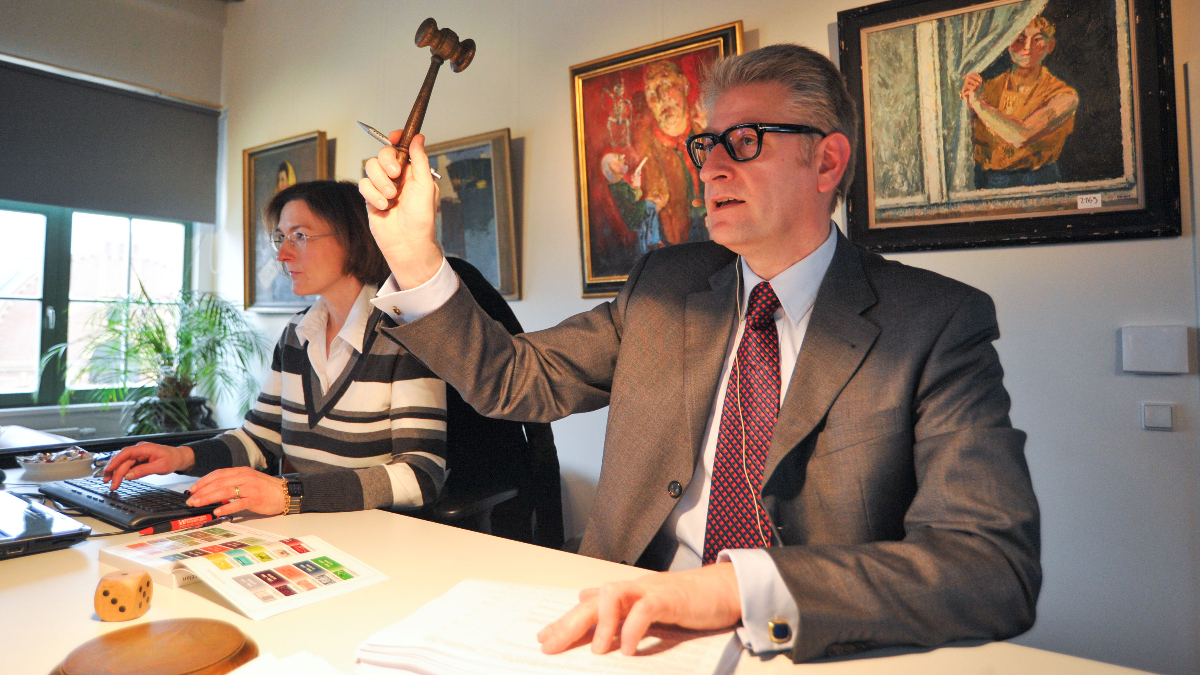 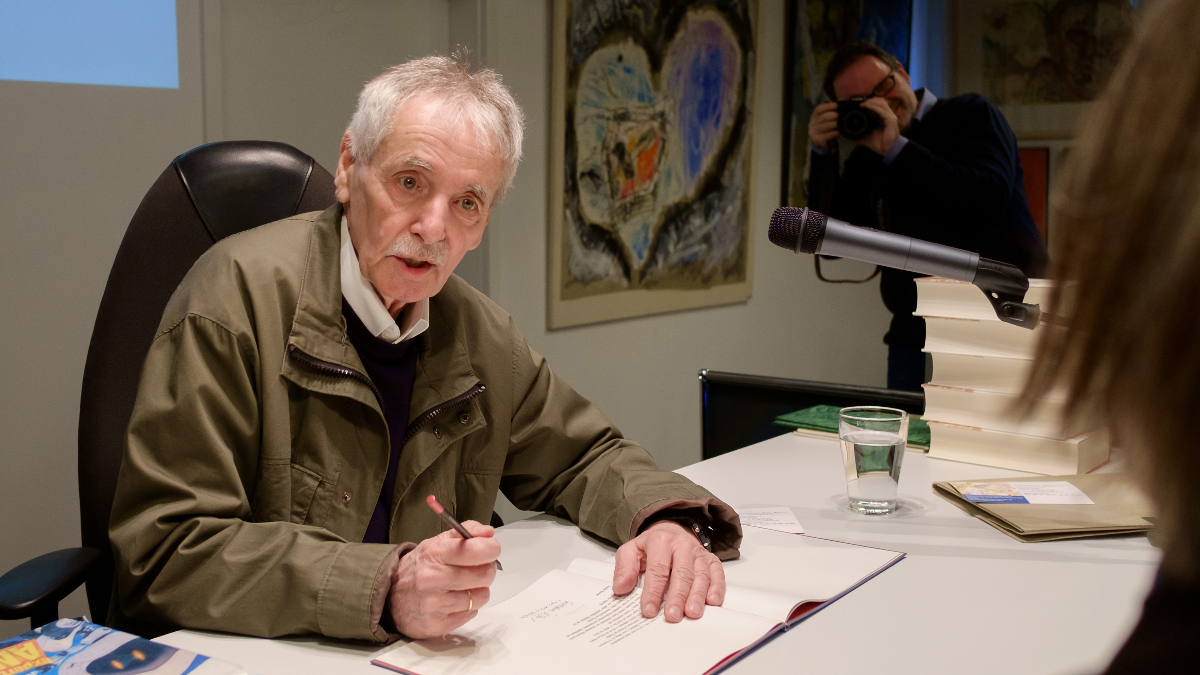 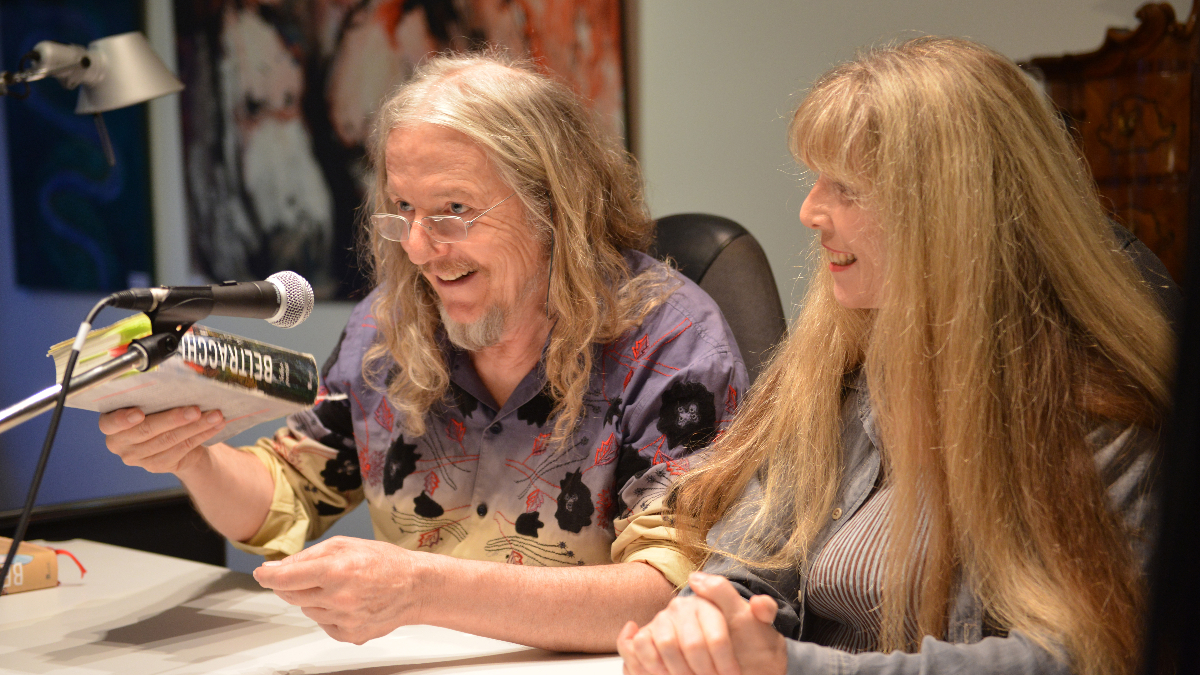 Reading and discussion with Wolfgang and Helene Beltracchi, 2014

Your auction house in Chemnitz since 1993! We evaluate and auction your art objects and antiques, advise you on purchases and offer you auctions both online and in our hall!